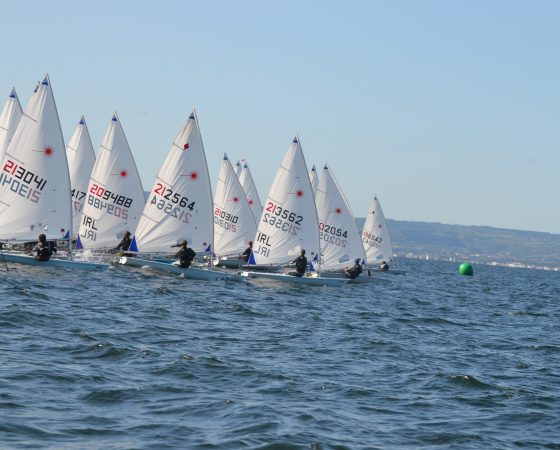 Racing took part of over two days on Saturday 19 and Sunday 20 September and the fleets were split to reduce overall numbers on site each day to mitigate risk in accordance with COVID – 19 guidelines.

The ILCA 6 and 420s took to the water on Saturday for five races in perfect conditions of 15 knots and sunshine.

Ellen Barbour from County Antrim Yacht Club showed good form early on to lead the way in race one, only to fall foul of being over at the start. This gave Coleraine Yacht Club’s Tom Coulter the win followed by Colin Crichton of Quoile Yacht Club in 2nd.

Race two saw Erin Mcllwaine from Newcastle Yacht Club was fast out of the blocks and took the win for race two with Crichton again runner up and Coulter in 3rd.

By race three Coulter started to show some dominance with his second win of the event followed by Ballyholme’s Oliver Haig.

The girls led the way in the fourth race with Mcllwaine doing her best to close the gap to Coulter with another win and Barbour a close 2nd to prove her performance in race one was not a one off.

Joseph Karauzum from County Antrim Yacht Club secured a win in race five closely followed by the determined McIlwaine. However, a 7th place for Coulter in this race was enough to secure him first in the ILCA 6 overall and title of first youth in the event.

COVID restrictions put in place for Dublin unfortunately meant some sailors were unable to attend and race in the 420 class but there were three pairings on the water to fight it out for what was also the class Northern Championships.

On Sunday the dinghy park was full of activity as the colourful sails of the Topper classes and the youngest competitors readied themselves for the day’s races.

Despite an optimistic start with a light breeze this soon became fickle and shifty which meant only two races were held with no discards available.

Ballyholme’s Hugo Boyd was victorious in the Topper 4.2 Class.

Zoe Whitford from East Antrim Boat Club and Daniel Palmer from Ballyholme were tied first on points but after wining the last race, it was Whitford who emerged the winner of the Topper Class and also took home the prize of first Junior and First Junior Girl.

In the ILCA 4 fleet Hannah Dadley-Young from Ballyholme was dominate winning both races and subsequently first overall.

Ballyholme’s Junior sailors were crowned winners of the Club Trophy while Larne Grammar secured the title of Schools Cup Champions for 2020.

“In a year with a limited number of events I am pleased that we were able to run this event and I thank everyone for adhering to all COVID guidelines that were set in place. A special thank you has to go to Ballyholme Yacht Club, event organisers and race management team who ran a safe, fun event despite challenging circumstances.”

He added: “I now look forward to the training and selection weekends in early October to see our youth and juniors in action as they bid for a place on our Performance Pathway Squads.”

The 20/21 Youth Performance Programme training and selection will take place on the weekends; 3/4 October (Topper) and 10/11 October (Laser) at Cushendall Sailing and Boating Club.