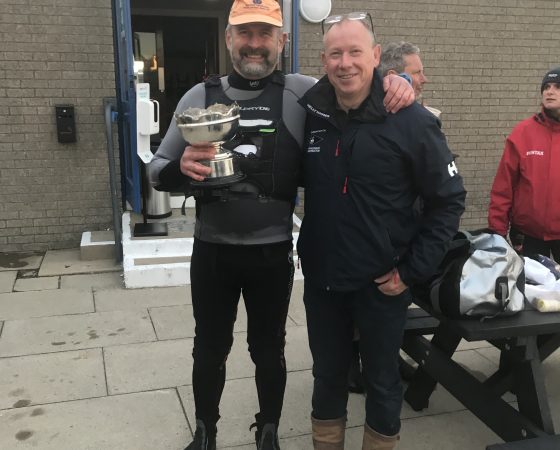 Unfortunately COVID restrictions meant we were unable to hold our annual prizegiving. Other awards were announced a few week ago in the bulletin but there were a few special Awards that we held back until we were able to present them. Huge congratulations to Mark Mackey who was awarded the Martin Imrie Cup and to Julie Wilson & Barbara Polly who were awarded the Vice Commodore’s Cup

I was delighted to award Mark Mackey with the Martin Imrie award for services to the Club.

Mark has been inextricably involved with the Club for many years.  Indeed from a young cadet to present, and has over recent years been instrumental in bringing a number of world class events to our shores.  Including the f18 Worlds in 2014, the Topper Worlds in 2016, the ISA Youth Championships and what would have been I have no doubt a very successful EurIlca Youth Laser Radials in 2020.  Mark has served on every Committee over the preceding last 12 years and been industrious in his work to secure funding for our Club.  Mark stood down last summer as Rear Commodore Shore to concentrate on his family life.  I would like to finish by saying Mark has been a great support to me and many members in the Club both on Committee and in social settings and is a worthy recipient of this award.

I was delighted to award Julie Wilson and Barbara Polly the Vice Commodore’s Cup for their commitment and volunteering service to our Club.  Julie and Barbara have been Members of the Club for many years and over this time have supported a number of Club activities most recently with the organization and staffing of the battery during the Icebreaker Series and the shore /safety of the open water swimming.  The dedication, attentiveness  to detail and support to our Club shown by Julie and Barbara has been well noted and both are worthy recipients of this award.

Huge congratulations Freya, wishing you every successCongratulations to Freya Sharp, a Year 14 pupil, who has received a conditional offer of a University Cadetship Entry scholarship with the Royal Navy and will start at Britannia Royal Naval College, Dartmouth in September this year. Freya will be passing out as a fully qualified Officer before attending university to study Naval Architecture with Marine Engineering, or Marine Technology.

“I am delighted by Freya’s news. This is a terrific achievement and I wish her well in her Naval Career.” ... See MoreSee Less

Well done Freya.Wishing you all the best of luck for your future.🙌🏻

Congratulations Freya, I know how hard you have worked for this, delighted for you xx

Just brilliant Freya. A very proud Dad let the cat out of the bag.

Great opportunity to win a Topper, Brian has worked so hard on this little boat all for an amazing charity. ... See MoreSee Less

It is with great sadness that together with ITCA GBR we have made the difficult decision to cancel this event. ... See MoreSee Less