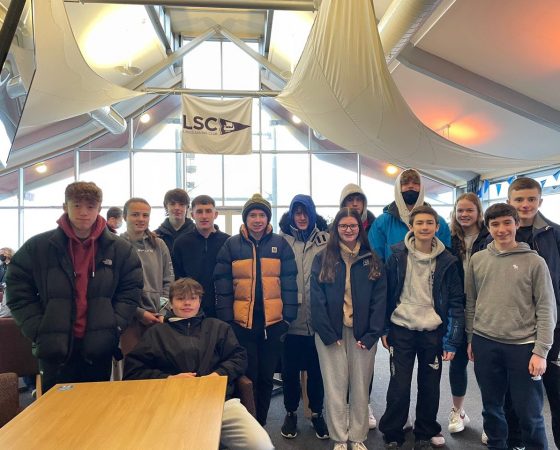 The RYA Celtic Cup was hosted by RYA Scotland at Largs Sailing Club on the weekend of 29th & 30th January with Youth Squad Members as selected by RYA Wales, RYA NI and RYA Scotland attending a coaching and race weekend in Optimist, Topper and ILCA 6 classes.

The RYA NI Topper & ILCA 6 teams comprised of 8 sailors per fleet. In the Topper class were 6 BYC Cadets, namely Bobby Driscoll, Cormac Byrne, Henry Nelson, Autumn Halliday, Katie Brow and Emily Macafee, and 4 in ILCA 6 class, namely Charlotte Eadie, Joshua McGregor, Lewis Thompson and Lucas Nixon. The team was accompanied by coaches, Chris Penny and Barry McCartan along with Andrew Baker, Performance Manager for RYA NI. The Teams along with supporting parents and friends travelled over on Friday to the Sports Scotland, National Sports Training Centre, Inverclyde where all the Cadets would be staying. With a busy weekend planned, the Cadets settled in their accommodation and the parents & friends moved offsite. We all woke up on Saturday to heavy winds and unsettled seas, baseline wind speed was recorded at 38 kts with gusts of 48 kts at Largs. The forecast was to remain windy for the duration of the day. The cadet teams were transferred by coach from Inverclyde to the Sailing Club where the Nation coaches put together workshops and talks. Sunday morning initially saw a complete reverse of conditions from the previous day, and with mild weather, the cadets and team coaches were keen to get racing and on water coaching underway, (before the forecast heavy weather came through again). There was a flurry of activity in the boat parks and marina from the get go, with race management, mark personnel and coaching staff getting their respective teams launched and the race course set. With RYA Scotland’s Performance Manager, Matt Toynbee keeping an eye on the water proceedings and organising as necessary, accompanied by Kate Pounder, RYA Scotland’s Performance Sailing Officer, a trapezoid course was set and the RO, got racing underway in baseline 13 kt winds from the south. As predicted, the wind continued to build quickly over the morning and by 1230 hrs the Cadets were racing in 25 kt baseline breeze with quite a big sea. With no let up in sight the decision was taken to finish racing for the day at lunchtime.

These were really quite challenging conditions and it was great to see all the cadets perform so well in such a competitive environment. With 4 races completed in the ILCA 6 Class and 3 Races completed in the Topper & Optimist classes it was a return to shore to input the results into Sailwave.

In the Topper Class, BYC’s Bobby Driscoll, took the individual win with 2 bullets and a second. In second place was BYC’S Autumn Halliday and Finley Briggs from Scotland took third place. The other BYC members, Henry Nelson finished 10th and Cormac Byrne 16th. Cormac unfortunately had a tiler extension breakage which resulted in drop down the fleet. Due to unforeseen circumstances Katie Brow and Emily Macafee were unable to travel and compete.

The team result saw The Celtic Cup being awarded to the RYA Scotland team, with RYA NI team coming a close second and RYA Wales, third. It was a great event and experience for our cadets and BYC extends their thanks to RYA Scotland for hosting and to the RYA NI Team and Coaches for their great preparation and support.

We look forward now to 2023, where The Celtic Cup will be contested either in Wales or Northern Ireland.