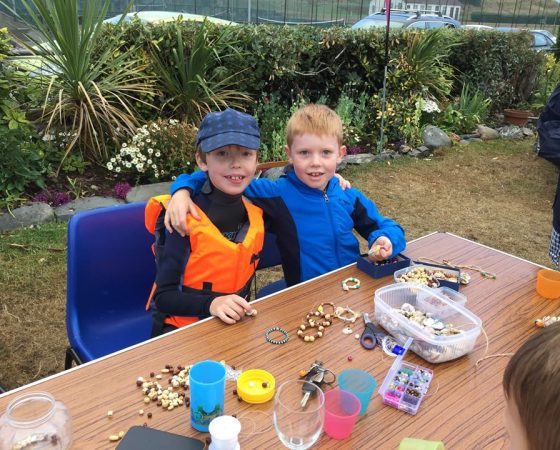 One of the club’s most loyal cadets has been showing his entrepreneurial skills by making amazing jewellery from shells and other items found on the beach and selling them to raise funds for Dolphins and Sharks, the junior section at BYC.  Edward Martin (8) with the help of his pal Dessie Gillespie (8), set up a stall at the club on two Friday evenings and the jewellery sold like hot cakes!  Not only did Edward sell them at the club but took them with him on his holidays to the North Coast.  The Cadet Committee is very grateful to and proud of Edward, who along with donating £15 of his own pocket money, raised over £75 for Dolphins and Sharks.

Everyday should be a mental health day, something we should all be very aware of in ourselves and those around us and this initiative is great to continue to highlight the importance of mental health.

Some tips below from Sport Northern Ireland and a link to their well-being hub.Today is #worldmentalhealthday2021 ❤️

If you are feeling low at the moment, please check out the tips below to help Boost your Mood! 👇🏼

Congratulations To the Irish Team and Liam Glynn Sailing!UPDATE: The provisional final results are in for the EurILCA Senior Laser European Championships that finished this afternoon in Varna, Bulgaria.

Congratulations on a top ten performance for Finn Lynch Sailing who finished in 7th place in the Men's ILCA 7; Ewan McMahon in 21st and Liam Glynn in 44.

Over in the Women's ILCA 6, Eve McMahon has finished in 15th place, and Aoife Hopkins Sailing in 25th.

The competition was won by Michael Beckett of GBR, and Agata Barwinska of Poland.

You can find the full results here: eurilca.org/2021-senior-europeans-results/

Junior Icebreaker is back and wonderful to see so many boats on the water. An amazing team of volunteer coaches committed to supporting our cadets - BYC at its best ⛵️

Thanks to Stephen Potter for another great photo

30 boats! What a fantastic turnout 👍