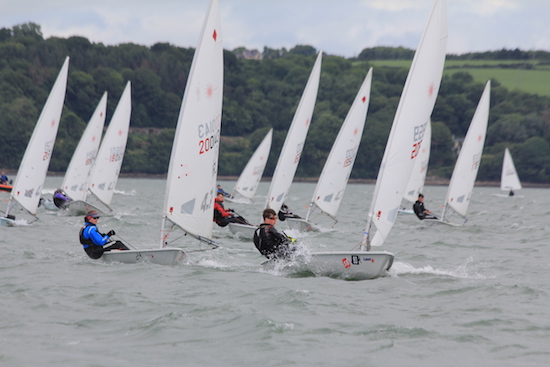 Last Sunday was another lovely day for dinghy sailing with moderate breeze from the North East giving us excellent racing conditions. The slight drop in wind speed gave some of the lighter competitors a bit more of a chance this week. It is unusual for the breeze to have stayed in this direction for so many weeks and Aidan set up a course sending us to the North East mark first using course 6.

The toppers were way first and it was great to see 4 toppers out last week. Connor Allen had a good day and held onto 1st place in only his second race this year. Charlie O’Malley was nudged into 2nd place with Dan Sherriff in 3rd but being pushed very hard by Charlotte Eadie. Charlie has a good lead in this fleet from Max Killner (who missed last week) and Dan Sherriff who is in 3rd. Charlotte is just behind in 4th place.

In the small dinghy fleet Ian & Aaron Moore in their Mirror managed to hold off Ruan & crew in the Feva.

James McNicholl came out for his first race and pushed Adrian Allen back into second place with a great race. Swannie did not manage to complete the race but I am unsure what happened!! Adrian still leads overall from Swannie.

In the large Dinghy David Fletcher and Ryan were not out to play but still hold onto the overall lead. Rob Milligan won last week which leaves him in 2nd overall with Brian Bibby in 3rd overall and he finished 3rd on Sunday. Robin and Dianne had second place last week but too many DNC’s are holding them out of the medals!!

The radial class had 10 boats on the water in what is a very competitive class this year. Jess Winton had another great race and claimed back to back bullets to stretch her lead at the top of the leaderboard. Mind you Ollie Haig is getting better with every race and making her work very hard. He was 2nd on Sunday. Joni had to settle for 3rd on Sunday and was working very hard to try and catch these young pretenders!!! Keep fighting Joni!!!
Our Italian visitor Sara had a super result finishing 4th and Josh McGregor in 5th. The experienced (and Grey) Colm McLarnon had a fantastic start…….. unfortunately he forgot he does not start with the large dinghys and collected an OCS for his efforts!! He is trying hard to get one of the lovely new Charles Hurst mugs – but Alex is being very circumspect with who he awards them to!!

In the standard class there were lots of incidents on the way round the course. Conor had a much improved race from last week and really was out of sight for most of it. He had a solid victory pretty much incident free. Jonathon Henry also stayed out of trouble and had a solid 2nd which keeps him 2nd overal, only behind by 3 points. Jonathon is putting together a very good series. It is fantastic to see Gareth Flannigan back in a laser after a couple of years away. He is getting back up to speed which is a bit ominous for everyone else in the fleet. He had 3rd last week and is working his way to the Sharpe end of the fleet. Another Gareth has made a welcome return to the laser class and it is good to see Gareth Martell back after 4 or 5 seasons away. He had 4th place after some really competitive racing between him and big Charlie Taylor, Chris Boyd and Richard Ramsey. Chris came in 5th after some interesting manoeuvres with Richard. At one stage I thought they were heading to Whitehead!! Charlie and Richard both had a dip in the water I understand. There was great debate in the bar afterwards between Shaun, John Simms and Conrad Simpson about how the normal way up the beat in that wind direction did not work out. At one stage the new building development at the banks was getting the blame!!!
There was also close racing at the other end of the fleet where Micky, Charlie and Robin were having battles for bragging rights. Also good to see Mike Kimber back out on a Sunday and it won’t belong before we see him at the Sharpe end of the fleet, or else shouting at himself if he is not!!!
Big Robert Eadie had a few more scalps last week and good to see him joining us for the icebreaker.

So Chris leads overall with Jonathon in 2nd and Charlie just back a further 3 points in 3rd. Conrad is sniping away at their heels in 4th and Conor Simms lurking in 5th. Too be fair it is the 2 DNC’s which are holding Conor back there. 3 first places in this series along with a 3rd makes formidable reading!!

So racing is still on this Sunday. For those who made alternative arrangements when it was originally binned the organisers will accept applications for redress on receipt of a signed form. They will give you average points if you cannot make sailing, which is very fair.

Anyone seeking redress, needs to so in writing and send to the office for the attention of the Rear Commodore Sailing