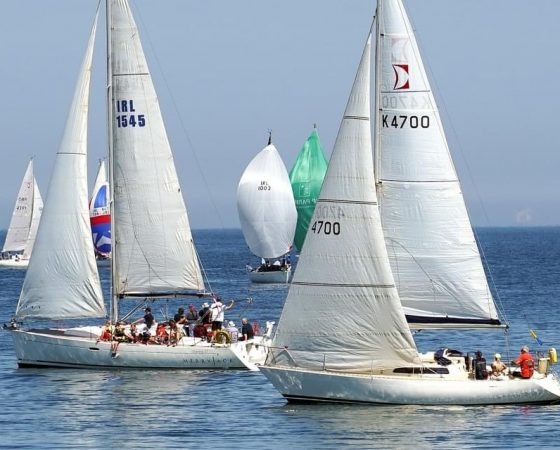 Saturday morning saw the weekend kick off with the Cadet Regatta Cadet, 38 boats having entered across Laser Pico, SailQube, Topper 4.2 and Topper 5.3 classes and with plenty of sunshine, all that was required was the wind to fill in on what would be a very hot day afloat and ashore at Costa Ballyholme.

The format of this event was 3 windward leeward races of 1 lap in Ballyholme Bay, however with the very light wind, the early indication at the start line was whether the intermittent breeze would hold long enough to hold a single race. As predicted a postponement was in order and with the appropriate indication given, racing was postponed and the course reset further out into Belfast Lough. After about 30 minutes and with a steady wind direction now in existence albeit still light from the north east, racing was now on and 32 Toppers gathered on the start line with all systems go, albeit slowly. After a long slow beat to windward, the cadet’s skill and patience levels of sailing in light airs was really tested and, as testament to all their capabilities, boats started to round the windward mark led by Danial Palmer.

At this point the wind filled in as predicted, ensuring that all the fleet could progress downwind.

In what was a hotly contested downwind leg for 2nd, 3rd, and 4th positions, Joseph Robinson, Katie Brow and Emily MacAfee were swapping positions regularly.

With a short beat to the finish line the first race was secured by Daniel Palmer, with Joseph Robinson and Toby Hughes in 2nd and 3rd place respectively.

In the Topper 4.2 fleet, Hugo Boyd grabbed the honours with Natalie Palmer coming in 2nd.

The 2nd race was started swiftly afterwards to take advantage of the steady breeze. This race was run over a shorter course. The pin end of the start was the favoured end with Faye McCarton getting the best start and taking the lead. The remaining part of the beat saw first place change a number of times with Faye, Bobby Driscoll, Toby, Daniel and Emily all trading the lead up to the mark. The finishing positions were Bobby, Daniel and Toby in 1st, 2nd, 3rd place respectively. In the Topper 4.2s Hugo and Natalie came 1st and 2nd again.

With the light breeze, the SailQubes and Laser Picos found it difficult to fight their way through the dirty wind of the Topper fleet. Emily-May Gillespie claimed the win in the Laser Picos, and Emma West-Hurst made a valiant effort in taking the SailQube around the course.

After de-rigging their boats, the Cadet Regatta finished with a prize giving ceremony, hot dogs, and orange juice for all.

The afternoon saw the main regatta start with the Class 1 boats at 1320 hrs with class race starting every 5 minutes thereafter under the watchful eye of the race officer Robin Gray and his team, which made for a spectacular sight in the lough with some 64 craft sailing around a course off Bangor and into Ballyholme Bay for finishing. The wind as forecast started to fill as the afternoon’s racing was underway resulting in an eye-catching array of coloured spinnakers as the classes competed around the race marks.

All boats having started according to their class (size, weight, sail area etc) certainly concentrated the mind of all concerned as the large racing yachts competed on the same sailing circuit as the dinghies. Each class had a determined the number of laps and course, however this ultimately resulted in a few boats not completing the pre-requisite number of laps, resulting in them failing to get a finish place.

A number of small dinghies also took to the water for the main Regatta event, however they found getting to

the start of the main race arena in time quite difficult as the forecast wind had failed to fill as yet, however some in the class had also failed to navigate the course correctly, however that was not the case with Hunter Reddy who claimed first place, unfortunately for Hunter the overall prize on corrected time for the small dinghy class was awarded to Ian and Aaron Moore in their Mirror Dinghy. James Moore of the same family also picked up a well sailed 1st prize in the Laser Standard class with Des Magee a worthy second.

After the sailing a number of those taking part returned to BYC for prize giving, the following were the winners in their respective classes: Class 1. Chris Boyd with ‘Free Spirit’. Class 2. M Mahon and J Hall with ‘Snoopy’. Class 3. Class 4. Lindsay Family with ‘Caesium’. Class 5. Mark Mackey and Andrea Fordham with ‘Mythril’. Class 6. Julie and Kate Pounder with ‘Brigand’. Class 8. Ian and Aaron Moore in their Mirror Dinghy. Class 8a. Unknown name. Sail 160367. Class 9. James Moore in his Laser Full Standard, Class 10. S Nelson in his GP14. Class 10a Jess Winton in her Laser Radial and in Class 11 M McMurtry in his F18 (Catamaran).

Sunday morning saw the annual Ladies Race, which was competed in Laser Picos around the BYC racing marks in the bay. The weather was again glorious but with a steady and increasing wind from the off providing the Ladies with great sailing conditions. The event comprised of two races and saw Jess Winton claim first place in race one with Jess’s mum, Charlie taking second and Katie McGregor third. Race two was swiftly underway after the last competitor crossed the line in race 1. Jess took an early lead, one which she was not to lose, however the positions of the other competitors changed as the race progressed and saw Katie claim second with Jenny Mullan third. The overall result meant Jess taking first place and Katie second.

Sunday lunch time saw the adult kayak race, again around a set course in the bay. There was a strong competitive edge to this one with all concerned making a race from the word go, with the exception of Nick West who was holding back at the start line in his Epic surf ski allowing the rest of the competitors a head start of nearly half the course distance in an array of sit in and sit on units, including a double unit with Helen Gaul and Linda Lennox eager to make progress through the fleet. Nick’s wife Amanda held the lead from the outset and finished just ahead of her husband at the finish line.

A short time later it was the SUP contingent to race, again around set marks in the bay. The interest captured a few late entries looking to make their mark. Upon the air horn all made short work of the course as the competitors negotiated an increasing chop in the sea state, however with core strength and balance very much evident we saw some competitive paddling. The honours went to Jamie McCoubrey again with Debbs Whyte claiming the Ladies prize.

The afternoon’s activities were rounded off with the Adult and Cadet swim races. The adults were off first around a course of approximately 800 metres. The water temperature was excellent, possibly the warmest it has been this year and viability good. The sea state however provided an extra dimension to the race, but the swimmers all dealt with the conditions well with Richard McCullough claiming the men’s prize and Caroline Mitchelson, the ladies. Immediately after the Cadets took to the water around a shorter course close to the Club house. This too was a hotly contested race with the Cadets making excellent progress in the conditions with Annaka Hunter taking the win.

A great weekend was had by all and a big thank you to all our Members and our local sponsor Robert Eadie, Garden Rooms Northern Ireland for making it all possible.