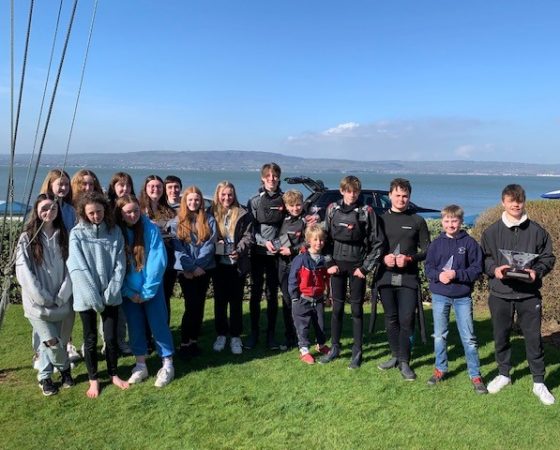 Last weekend saw the first of the Topper Ireland circuit of events for 2022, the Winter regatta held at Royal North of Ireland Yacht Club and sponsored by Simon Brien Residential Estate Agents.

Thirty seven young topper sailors from all around Ireland made the trip to the Club in Cultra for what the forecast had predicted all week would be perfect sailing conditions. However by Saturday morning the forecast wind had increased to over 30 knots, no matter which of the various web-sites and apps you looked at. There are two rigs for the topper the “standard” 5.3 and the smaller 4.2 and both fleets were held ashore while the race officer went afloat to monitor the wind strength and wave conditions. Throughout the morning the wind showed no sign of moderating and with the forecast showing no change in conditions due until late afternoon racing on Saturday was cancelled.

Sunday morning dawned and the wind was supposed to die down. Unfortunately once again it was gusting over 30 knots and the fleet were held ashore while the race officer went afloat to monitor conditions. By 10.15 the conditions seemed to have moderated so the fleet were released by the beachmaster to go afloat with a start scheduled for 60 minutes later at 11.15.

For the start of the 5.3 fleet the wind was strong, gusty and shifty, not easy for any sailors and challenging for your first event of the year. The increasing winds saw a number of the young sailors coming ashore having retired, through gear failure, sailor tiredness or just because of the strength of the wind. Come the finish line for the 5.3 fleet Bobby Driscoll had a commanding lead which subsequently also gave him the event win and first male youth as there were to be no more racing due to the increasing wind. Bobby is a member of both Ballyholme and the host club RNIYC. In second place was Autumn Halliday from Ballyholme and Strangford Lough yacht clubs. Autumn was also first female youth. Third and fourth places went to Eoin Byrne and Sarah Clooney from Waterford Harbour sailing club. In fifth place and first male Junior was Henry Nelson followed by Emily McAfee who was first female junior, both from Ballyholme Yacht Club. The other Ballyholme sailor on the podium was Hunter Reddy who was eighth overall and third male junior.

The 4.2 fleet was won by Callum Pollard from County Antrim Yacht club in Whitehead followed by Hugo Boyd from Ballyholme and in third Mateo Moore from Carrickfergus. Callum and Hugo fought it out for first and second in the RYANI youth championships in 2021 so it will be interesting to watch them battle it out for the rest of the season.

The Prize giving took place on the lawn at RNIYC with Tiffany Brien from Simon Brien Residential there to hand out the prizes.