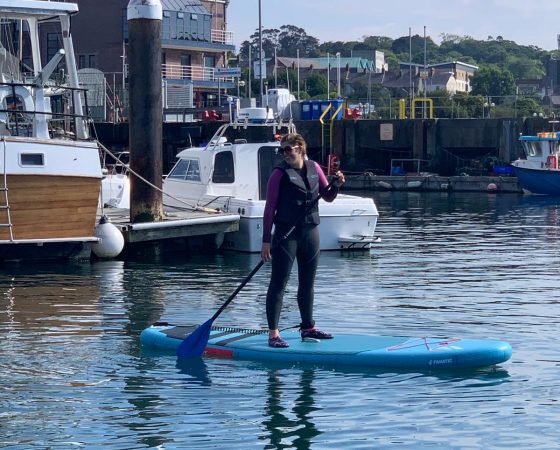 Stand Up Paddle Boarding or SUP, as it is commonly known, has become a popular watersport in recent years. With the number of local paddleboard owners and interested paddlers increasing, Ballyholme Yacht Club has teamed up with SUP Hub NI to introduce another non-sailing watersport to the club. This is in addition to kayaking, diving and open water swimming.

Following an information evening at Ballyholme in February, ten budding SUP enthusiasts signed up for a beginner’s ‘Ready to ride’ lesson with Iain from SUP Hub NI. Even a three month lockdown couldn’t diminish spirits and once it was safe to return to the water 2 groups of 5 (freshly sanitized and socially distanced) headed to Bangor Marina to avail of the calm sheltered waters.

The self-named “over 50’s group” were first up. The class began with an onshore briefing to cover all the essentials: boards and paddles, safety equipment, when to SUP based on wind, waves & tides, how to get on your board and what to expect when you stand up – jelly legs! Once the questions were covered, marina staff notified, leashes attached and buoyancy aids firmly clipped on the team took to the water.

The first splash award was handed out to Naomi as the move was made from kneeling to standing but that didn’t stop the smiles as she was straight back on the board and standing like nothing had happened! Within minutes, the whole group had completely mastered the basics, all with no previous experience. Once everyone was confident and had recovered from the initial jelly legs, the more technical elements such as turning were introduced. This is where things got competitive; the first person to complete 3 turns would take home a bottle of gin. It was at this point Barbara enjoyed a quick open water swim in her haste to complete three turns and claim the prize! The second group may have mastered standing up first time round but learnt quickly to put the breaking technique into play. Another brilliant session was had by all, with two out of five able to resist a refreshing dip; although the summer sun did make the marina waters seem tempting believe it or not. This keen crowd also discovered headstands on paddleboards look much easier than in practice!

It is safe to say, boards and paddles were reluctantly returned to SUP Hub as all 10 members were instant SUP converts. As a sport that can be enjoyed by anyone, regardless of their skills or abilities, it was a great opportunity for many of the BYC members to get out on the water, resulting in a few BYC social memberships being switched to full membership. The addition of SUP to the watersports offering at BYC means a more inclusive club that the whole family can enjoy.

There is a SUP style for everyone, whether you want to race your SUP, tour around Ballyholme and the surrounding coastline or simply mooch about the calm waters of the bay with a clear head and nothing to think about but staying upright.

For those of you wishing to get involved, there are plans to introduce weekly SUP and kayak evening at BYC in addition to a SUP Series Race League hosted once a month at Ballyholme. As the BYC return to water plans are continuously being reviewed in line with updating government advice, further information on these events will be shared in due course. Keep an eye on the Facebook page  and website for all SUP news and event updates.